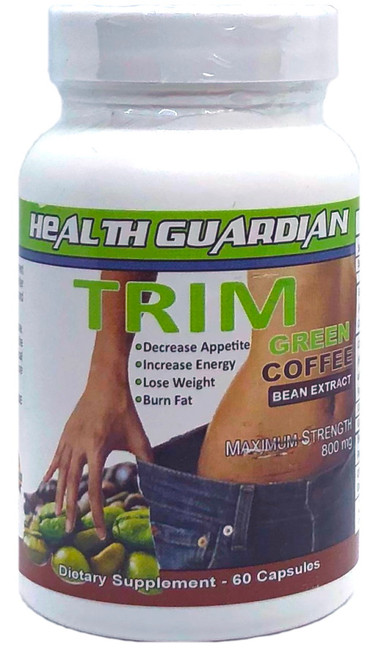 SKU:
UPC:
Shipping:
Calculated at Checkout
Bulk Pricing:
Buy in bulk and save

HG Trim is a unique formula which combines the active ingredients from several popular weight loss products. There are 60 capsules per bottle and the recommended dosage is 2 capsules any time after breakfast. You will experience a much more alert and energetic feeling that lasts all day long. The amount of caffeine in Health Guardian Trim is equivalent to 2 cups of coffee, but it's a more time released energy without a crash at the end of the day. When the fat burning and appetite suppressing power of HG Trim is combined with HG Cleanse (a colon cleansing product) and HG Slim (a great tasting meal replacement product), a person will find the pounds starting to disappear in no time!

Green Coffee Bean Extract 400 mg (50% Chlorongenic Acid): There is new evidence that green, or unroasted, coffee beans can produce a decrease in body weight in a reasonable period of time. Results will vary from individual to individual depending on your activity and your nutritional choices. In a study published in the journal of diabetes, metabolic syndrome and obesity researchers from the University of Scranton in Pennsylvania describe how a small group of overweight or obese people who consumed a fraction of an ounce of ground green coffee beans each day lost about 10% of their body weight. The chlorogenic acid in green coffee helps you manage your weight and promotes fitness in a variety of ways. First, according to research reported in the American journal of Clinical Nutrition, chlorogenic acid from green coffee reduces sugar absorption from the intestines. It also has been shown to help inhibit an enzyme to the liver that releases sugar into the bloodstream. These two effects help to maintain healthy sugar levels so you can control your appetite. Chlorogenic acid has also been shown to speed up the rate of metabolic fat burning and laboratory studies have even shown a reduction in the size of fat cells. Dr. Oz has put his name behind the use of the green coffee bean for successful weight loss.

Citrimax 400 mg: Citrimax or hydroxycitric acid (HCA) has become a popular ingredient for weight-loss products. It is derived from the rind of Garcinia cambogia, a fruit from India that resembles a tiny pumpkin. Its makers tout it as a "carb blocker," meaning that it prevents carbohydrates from turning into fat. Studies show that Citrimax blocks an enzyme called ATP-Citrate Lyase which leads to a reduction in the conversion of carbohydrates to fat. It also appears to reduce appetite. Citrimax may help athletes prolong exercise according to a study conducted by Maastricht University in 2001. One group of cyclists drank a liquid containing 18 grams of Citrimax; another group drank a placebo. The Citrimax group showed significantly lower lactic acid levels after exercise as well as its production in muscles during exercise. Lactic acid results in muscle soreness and fatigue.

Citrus Aurantium Extract 200 mg: Citrus Aurantium extract is also known as bitter orange. It's also known as Zhi Shi in China where it has been used for its medicinal benefits. Citrus Aurantium Fruit extract comes from bitter orange as well as the peel. Once picked, the fruit is halved and then quartered, and milled into a powder to be used in supplements. Its main component is synephrine, a substance said to promote fat burning, increase energy, increase metabolic rate, promote weight loss and increase body heat. The most notable benefits of Citrus Aurantium extract are its ability to increase resting metabolic rate, which results in weight loss. It is found to exhibit a powerful thermogenic effect, and does not produce the undesirable side effects on blood pressure and heart rate that ephedrine does.

Guarana Seed Extract 200 mg: Guarana is a plant found in abundance throughout South America. The seed of guarana has been used since ancient times to treat a variety of ailments and as a general-wellness tonic. The caffeine in coffee is a stimulant that can give you a false feeling of energy which causes the body to experience a "spike and crash" syndrome. For a while you feel recharged but before you know it you crash. Scientists have found that guarana releases its caffeine gradually causing sustained energy over a long period of time. Other benefits discovered are increased mental sharpness and enhanced long-term memory. Traditionally, it has been used for headaches and migraines. It is also used as an antibacterial agent. Guarana is often added to herbal weight loss supplements to increase the thermogenesis and help control appetite.

BioPerine Extract 150 mg: BioPerine is an extract derived from black pepper (Piper Nigrum L). Piperine is what gives peppers their spicy taste. This extract is marketed as a nutritional supplement and has been found to increase the absorption of a variety of nutrients. The most established effect of piperine is its effect on absorption of nutrients from the intestine. This effect is known as "bio enhancement" according to an article published in the "Journal of Ayurveda and Integrative Medicine" in 2010. Bioperine supplements are very popular with both athletes and people trying to lose weight. This is because of the supplement's ability to energize and enhance thermogenesis. Thermogenesis is known as one of the main factors of weight loss and is vital for absorbing nutrients and food. It is also an important facet to gastrointestinal absorption and digestion.